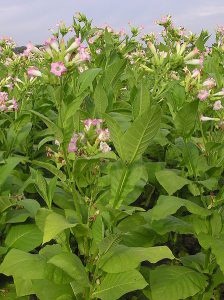 Tobacco
These days, Americans don’t smoke cigarettes nearly as much as they used to. Still, in North Carolina, tobacco still plays an important part in society. If you drive out of many towns, you will come across miles and miles of fields of tobacco.

Tobacco is a tall plant with waxy leaves that grows waist-high. The sun is very strong in North Carolina and by August the leaves begin to go brown. Around this time, the famers come out in their tractors and harvest the leaves.
Once all the leaves have been harvested, the tobacco is hung out to dry. This drying process is known as curing. Throughout North Carolina, there are many barns in which the tobacco is hung.
Tobacco that will be used for cigars is hung in barns for several months and dries in the air. This gives the tobacco a mild flavor. Tobacco that will be used for cigarettes is dried more quickly using heated pipes. This gives the tobacco a sweet flavor.
Although tobacco is not grown in England commercially, the English consider the tobacco plant, with its large green leaves, to be a beautiful addition to a garden. Some people plant the tobacco under the windows of their houses. The tobacco flowers open only in the evening and fill the garden and house with a sweet scent.
I have never seen tobacco growing in Japan, but I imagine that it can also be found in gardens here too. By the way, in Japanese, タバコ means both tobacco and cigarettes, but in English the word is not used to describe cigarettes . Tobacco, therefore, is a word that is often used incorrectly.
waxy – すべすべした
barn – 納屋
curing – 乾燥処理する
commercially – 営業的
iPod, iPhoneなどを使う方またはiTunesからこのポッドキャストをダウンロードしたい方は以下のリンクをクリックして下さい。 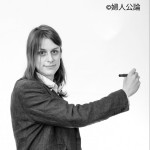